Leave a comment
By christiangirlsguidetodivorce© Adventure, Healing, Self Discovery

Andrea and I landed at Charles de Gaulle in the early morning.  We fumbled around the airport, found a way to purchase train tickets into the city, and, although exhausted, we happily planted ourselves on the commuter train.

I glanced around at the passengers and noticed a young woman reading the bestseller, Eat, Pray, Love.

We burst into excited laughter.  Our adventures were just about to begin!

Once we made it into the city, we navigated ourselves  — and our ridiculously heavy luggage — through the underground Metro.  We had rented an apartment in the Marais for the week, and were desperate to settle in.

Thankfully, Andrea speaks fluent French (I told you I have amazing friends), so we were able to make our way to Rue de Quincampoix looking far less touristy than we actually were. We met up with the apartment owner – a lovely young artist – but quickly realized that neither of us had Euros to pay the rent.  (Note to self: change money before getting on the plane!)  Delirious, we scrambled around the neighborhood to find a bank.

Money and keys finally changed hands, and we were officially Parisian residents.  The two-story, 290-square foot apartment was much smaller than either of us had expected, but it had everything we needed.  As soon as we climbed upstairs, we didn’t care.  The view of the Parisian rooftops, not to mention the steeple of St. Paul- St. Louis Church (and the sound of its glorious bells), was worth the price alone.  Sharing a bed was funny, but we were used to it.

We headed out, still dressed in almost two-day-old clothing.  I was convinced that I smelled like re-circulated air from the plane, but it just didn’t matter. 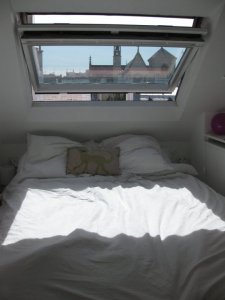 We were in Paris.

We lunched at an outdoor café, just blocks from our apartment and the Pompidou Center.  I turned my face towards the warm, glowing sunlight and inhaled the sweet afternoon breeze.  It smelled of cigarette smoke, baked bread, history, B.O., champagne, romance and hope.

I suddenly realized that I had fallen in love.  Paris had my heart.  I was transfixed, and hungry for more.

We finished our light lunch and were off to the grocery store to stock our tiny kitchen with the most delicious French cheese, bread, jam, yogurt, tea, lettuce, fruit, vegetables and, of course, wine.

We returned to the apartment, took turns hovering in the Barbie-sized shower, and headed out again.

Over tired/excited, I dressed in the most ridiculous outfit I had packed – a green mini dress, a gold scarf my sisters had bought for me in Italy, a black leather jacket, and brown, almost-knee-high boots. 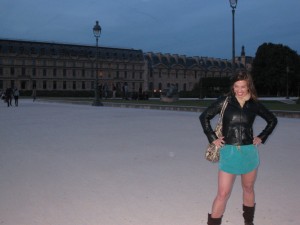 What not to wear in Paris…

There was no set plan, but to explore.

We strolled towards the Seine.  Our first stop was at a little café on the corner, overlooking one of the many famous, picturesque bridges.  We had easily been lured in by a Hot French Waiter (Part Deux!), who eagerly served us.  We nibbled on cheese and sipped little glasses of Kir as we watched the afternoon sunlight start to fade into a glorious, bustling city glow.  Somewhere beyond my view stood the Eiffel Tower, in all of its glory.

Inevitably, I had to make my bladder gladder, so I excused myself inside the restaurant.  Not looking where I was going, I ran into Hot French Waiter Part Deux and almost knocked over his tray of wine glasses.

“Oh!!  Je suis désolé! Pardonnez-moi!!”  I blushed, and tried to fake a good French accent. Maybe he wouldn’t notice that I couldn’t speak a lick of his native tongue.

He smiled, and grabbed my hand.

I stared at him. My hand started to tingle.

“What?  No…no, my name is not Marie,”  I replied, and then I realized I had blown my cover.  Actress fail.

He threw his head back and laughed.

“I ask yooooou? Eeeeef yoooou? Are married,” he repeated, slowly, as if I didn’t understand English, either.  His thick French accent was palpable.  I took in a deep breath.  Paris felt so good.   And, there I was, standing in the middle of a romantic café, holding hands with a man.  Just like that.

That familiar, wide grin spread across my face.

Still holding my hand, Hot French Waiter Part Deux got down on one knee.

He stared deeply into my eyes as his lips lightly brushed the top of my hand.

My heart fluttered, my knees grew weak, and my bladder screamed at me.

He laughed, jumped up and gently guided me towards the restrooms.

Hot French Waiter Part Deux was busy when I returned to Andrea and our table.  I gave her the quick replay.  Why, yes, I had just received a marriage proposal within hours of landing in Paris.  My life really wasn’t all that bad.

“You said you were coming here to kiss somebody,” Andrea pointed out.  “He just asked you to marry him.  You can certainly give him a kiss!”

She was right.  I was just so overprotective of myself, not to mention inexperienced.  I had been on a handful of dates and only kissed three men since filing for divorce from X.

I took another sip of my Kir and reflected on my “love life”.

In August of 2010 — on X’s birthday, to be exact — I had a wild, unexpected makeout session with an old college crush.    It was our second date – the first having been three months earlier.   It was new, exciting and dangerous, and everything felt so…wrong.

He never called me again.

In December of that year, my friend basically dared me to kiss him, so I did.  It was actually very sweet, but I insisted that we remain friends.

And, I had met a guy just a couple of weeks earlier, while in Minneapolis.  I was out to dinner with my lovely friend and fellow Vixen, Julie (she is married to Brian Setzer).  The restaurant was packed, so we sat at the bar.  I thought nothing of it as I struck up a conversation with the friendly, cute bartender.  He happened to be extremely smart, and a talented filmmaker, as well.

He asked me out on the spot.

I was shocked.  That never happens in Los Angeles.  At least not to me.

Why not?  I thought.  I was leaving town the next day, so nothing was going to happen.

Much to my own surprise, I found myself agreeing to kiss him, as well.  He was old-fashioned, chivalrous and sweet.  He treated me well and respected me.  He also begged me to keep kissing him.  He told me that he had never met anyone like me before.  He was crazy about me, all in a matter of a few hours.

My self-protective, Don’t-come-near-me-and-hurt-me-you-douchehound signal had begun to flicker off.  Apparently a stronger, Come-ask-me-to-marry-you signal had switched on.  I needed to find a balance.

Andrea and I finished our “happy hour”, planted a few Euros atop the bill, and got up to leave.  Hot French Waiter Part Deux swiftly re-appeared.

He held out his hands, as if I had mortally wounded him with my sudden departure. After all, I had never responded to his marriage proposal.

I walked towards him, put my arms around him, and hugged him hard.  I then planted a bold, firm kiss on his cheek.  He seemed rather surprised at my expression of affection.

“Merci,” I whispered, and then turned and sauntered down the cobblestone street, feeling happy, confident and – I daresay – sexy.

My French kissing warm up was complete.