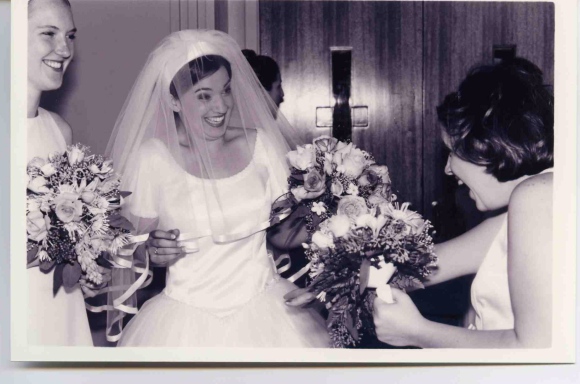 Moments before I walked down the aisle, sixteen years ago.

Sixteen years ago today, I got married.

My dad walked his 22-year-old daughter down the aisle to a majestic organ in a beautiful sanctuary on a hot afternoon. I carefully recited my vows and promised my fresh-faced groom I would love and honor him until death did us part.

The reception was small: held in a petite garden area next to the church parking lot. We served sparkling apple cider and charcuterie from Costco. A jazz band comprised of fellow college students played quietly and a budding filmmaker captured moments on Hi8 tape. Due to the unseasonable warmth of the day, the homemade wedding cake melted before my new husband and I could ceremoniously cut it. He proceeded to smash a piece all over my face, anyway.

There was some confusion over the remaining few hundred dollars of the wedding bill, which caused the last of my makeup to be cried off. We left for our honeymoon in my 1997 Toyota pickup truck; the remnants of the fallen cake streaked all over the vehicle. The back window jokingly read, “Mr. and Mrs. Spencer”.

It wasn’t the wedding I wanted, but it was the best I could do.

We were so young.

Today, the sanctuary has been torn down and made new. The garden has been replaced with church offices, where I spent almost five solid months in marriage counseling after discovering my husband’s infidelity.

The organist recently received a heart transplant, the musicians all have steady, successful careers and the videographer became a widely recognized director and won a million dollar Superbowl commercial contest.

And I am happily divorced.

“It’s not the wedding, but the marriage that counts,” they say. If my wedding was any indication of the sort of marriage that followed, I should have bolted the opposite direction down the aisle at the very first note of the processional.

But I believe in marriage. I think it’s amazing, difficult and utterly courageous to make that kind of commitment to another person. Certainly, I was young. Perhaps too young. But I wasn’t afraid. And when my marriage went to complete shit, I held on and fought for the concept – and the person – as long as I could.

I admire that girl. I’m proud of her.

The person and the girl are now gone. But I do not regret the commitment, if only for the role it played in giving birth to the woman I have become.

So today, on my 16th Universary, I do not mourn the loss of a marriage, but cheer for forgiveness and the freedom that accompanies it. I honor growth, wisdom, vulnerability and true, selfless, mature love.

I celebrate the gift of a second chance.

One thought on “16th UNiversary”