Moments before I walked down the aisle, sixteen years ago.

Sixteen years ago today, I got married.

My dad walked his 22-year-old daughter down the aisle to a majestic organ in a beautiful sanctuary on a hot afternoon. I carefully recited my vows and promised my fresh-faced groom I would love and honor him until death did us part.

The reception was small: held in a petite garden area next to the church parking lot. We served sparkling apple cider and charcuterie from Costco. A jazz band comprised of fellow college students played quietly and a budding filmmaker captured moments on Hi8 tape. Due to the unseasonable warmth of the day, the homemade wedding cake melted before my new husband and I could ceremoniously cut it. He proceeded to smash a piece all over my face, anyway.

There was some confusion over the remaining few hundred dollars of the wedding bill, which caused the last of my makeup to be cried off. We left for our honeymoon in my 1997 Toyota pickup truck; the remnants of the fallen cake streaked all over the vehicle. The back window jokingly read, “Mr. and Mrs. Spencer”.

It wasn’t the wedding I wanted, but it was the best I could do.

We were so young.

Today, the sanctuary has been torn down and made new. The garden has been replaced with church offices, where I spent almost five solid months in marriage counseling after discovering my husband’s infidelity.

The organist recently received a heart transplant, the musicians all have steady, successful careers and the videographer became a widely recognized director and won a million dollar Superbowl commercial contest.

And I am happily divorced.

“It’s not the wedding, but the marriage that counts,” they say. If my wedding was any indication of the sort of marriage that followed, I should have bolted the opposite direction down the aisle at the very first note of the processional.

But I believe in marriage. I think it’s amazing, difficult and utterly courageous to make that kind of commitment to another person. Certainly, I was young. Perhaps too young. But I wasn’t afraid. And when my marriage went to complete shit, I held on and fought for the concept – and the person – as long as I could.

I admire that girl. I’m proud of her.

The person and the girl are now gone. But I do not regret the commitment, if only for the role it played in giving birth to the woman I have become.

So today, on my 16th Universary, I do not mourn the loss of a marriage, but cheer for forgiveness and the freedom that accompanies it. I honor growth, wisdom, vulnerability and true, selfless, mature love.

I celebrate the gift of a second chance.

Picnics, Padlocks and PDA in Paris

It’s simply the most amazing city.  The cobblestone streets; the architecture; the churches; the history; the language; the smells; the lovers; the wine; the light; the romance.

The next day, Andrea and I had plans with her longtime friend, Cecile, who is a winemaker. We met her for an early afternoon picnic of the most amazing Corsican sandwiches in the Place des Vosges.  Cecile flamboyantly arrived with a large, refrigerated bag full of carefully chosen wine, fruit and beautiful wine glasses.  She dressed her tiny frame impeccably French, a la Audrey Hepburn.  In addition, she wore a large, floppy hat, fashionable sunglasses and bright red lipstick. She squealed with excitement when she was reunited with Andrea. 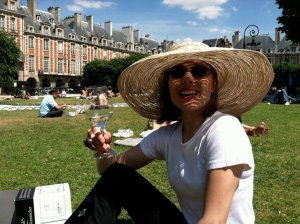 As the three of us conversed in and out of French and English (guess who needed the English), I gazed around at my environment.  I couldn’t get enough of it.  The sky was a piercing blue, lightly adorned with fluffy, white clouds.  The air, warm and fragrant, playfully caressed my hair, and the lazy sun gently warmed my skin.  Parisians lounged on the grass near us, sipping wine; reading books; chatting; strumming guitars.  Children played in the fountain, and lovers gazed into each other’s eyes, exchanging kisses and affectionate caresses.

I swear I saw a single, red balloon drifting in the breeze.

“So, Lezzzlie,” Cecile filled my wine glass.  “I hear zat yooou?  Are wanting to kiss one of our men?”

Andrea and I took turns explaining that we were in Paris to celebrate my divorce (how does one interpret the humor of  “Sister Wife” in French?), and that I had a goal of finding someone to kiss during our short stay.

I honestly didn’t think it would happen, but it made for a good story.

“Yes!  Zees is a good plan!”  Cecile exclaimed, as she examined, then swirled the fresh wine in her glass. “You, Lezzzlie, are the American COUGAR!  You will find a man to kiss – maybe two or three? – and you become ‘ROWR’!  Cougar!”  She howled.

Language barriers are, at times, quite hilarious.

Cecile’s friend, Geraldine, met up with us a couple of hours later for coffee.  As we sat at the little café across the way from the ancient courtyard where we had picnicked, I couldn’t help but think of the four of us as some sort of bizarro, French “Sex and the City” characters.  There was one exception: Geraldine was intolerable.  She’d never make the cut.

We finished our coffee and crepes, said goodbye to Intolerable Geraldine and Lovely Cecile (“Goodbye, see you soon, American COUGAR!”), and made our way to Notre Dame for the late afternoon mass. 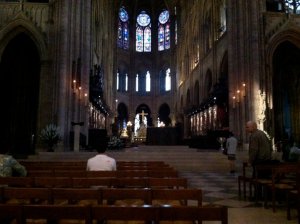 Afterwards, we leisurely headed towards our apartment to prepare for an evening outing.  As we neared the Seine, we noticed a rather large crowd gathered on one of the pedestrian bridges.  Happy picnickers occupied every inch of the Pont des Arts.  We managed to find a space to sit down, and, seeing as we had leftovers from our afternoon picnic, we easily fit in.

The sun began to sink, slowly, into the picturesque horizon.  We poured and enjoyed the remainder of Cecile’s wine, which somehow managed to stay perfectly chilled. We were flanked on all sides by the Institut de France, the Palais du Louvre and, upstream, the majestic Notre Dame Cathedral.  Far off in the distance, the top of the Eiffel Tower inched its way towards Heaven. 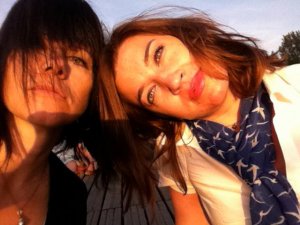 As we absorbed the breathtaking scenery, I noticed that there were hundreds of padlocks in various shapes, sizes and colors, affixed to parts of the bridge.  Most all of the locks were engraved with the initials of their lovesick owners.  I later learned the meaning of these “love locks”.  It’s simple:  Go to the Pont des Arts bridge with your person. Attach your lock to the bridge, throw the key into the river below, and your love is forever sealed.

I (retroactively) decided, right then and there, that I’d be back someday with an engraved padlock and the one I love.  I don’t care how long it takes to find him, or for him to find me; I don’t care if I’m 80 years old.

I’ll be standing on that bridge with him, and our lock will hang on through all kinds of time and weather.

And, yes.  It’s dramatic and romantic, just how I would like it to be.

We finished our second picnic of the day, and wandered again through the white, dusty courtyard of the Palais du Louvre.  We snapped pictures of the glorious sunset, which shone its brilliant orange light through the glass panes of the Louvre Pyramid.

We ate a sensible meal at the apartment and spent some time planning our next day’s adventures – how to rent the bicycles we saw all over town?!  — and then Andrea and I headed out on foot once again for an after-dinner aperitif, and to explore more of the city at its most brilliant: nighttime.  We chatted excitedly about our full, yet relaxing day, and decided that we needed to make picnicking more of a regular routine when we returned home. As we rounded a street corner, I heard a group of men laughing and carrying on in the café across from where we strolled.

Suddenly, one of the taller, more attractive men was waving his arms and beckoning to me.

True to fashion, I waved and shouted back.

The rest remains a bit of a blur, but, suddenly, I found myself in the arms of a very tall, very dark, very handsome, very muscular, very French man.

And he was kissing me.

I mean, kissing me.

And, well, I kissed him right back.

Andrea did not miss the opportunity to snap some (blurry) pictures. 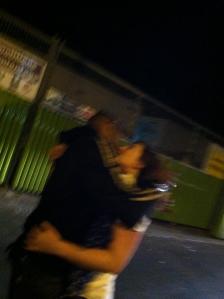 After a few minutes of a very public make out session, Andrea pulled me away from my “date”.  I laughed and started to walk away, but decided I hadn’t had enough of that first-time experience.  So, I turned around and went back in for just a few kisses more.

Yep.  I was that Christian girl.

Andrea pulled me away again, and we squealed as we began to run away.

My Frenchman called after me —  “HEY!!!” – but we kept running, stumbling and laughing up the cobblestone street.

What had just happened?!  I had made this grand declaration that I was going to Paris to kiss someone, and, BAM, within 36 hours of setting foot in the City, I had a marriage proposal and a kiss on the cheek from one man, and a very passionate kiss on the street from another.   I was starting to realize I’d have a much better chance at finding a date in Paris than finding one in Los Angeles.

Sure, if that had happened back home, I might have called the police or sued the guy for sexual harassment.

But Paris was different.  What is more, I was different.  And it felt good.  It was empowering.  There was something so thrilling about being grabbed and kissed, like I so needed to be.  I needed someone – anyone, I suppose – to see me for who I am.

Frankly, I am just kissable.

And, as Paris – or I — would have it, the kissing wouldn’t stop.