10 Comments
By christiangirlsguidetodivorce© Self Discovery

I’m lying on my back in the middle of Sheep Meadow in Central Park. The clouds above me appear ominous, threatening to reveal the heavens and pour torrential rain upon the earth.

Yet, not even a drop falls. The breeze is refreshingly light; the air warm and fragrant with fall.

My phone buzzes, and I reach into my heavy, oversized bag to respond to a single text message. It’s from my best friend, Joy.  Her first child – a healthy girl named Autumn — will be delivered via C-section on the first day of autumn.  At the same time, Joy’s grandmother is dying. I immediately call her. We talk for over an hour, laughing, crying and marveling at what this week entails.

We conclude a new season has truly begun.

After I hang up the phone, I wander out of the park and through a neighborhood of Upper West Side brownstones. The comforting smell of incense hits my senses and I am drawn through the open door of The Church of the Blessed Sacrament. Several individuals are scattered throughout the sanctuary with their heads down in fervent prayer. The organist rehearses the same sixteen bars of music, over and over again.

I drop my heavy bag on the wooden pew. It makes a loud noise and startles a sleeping homeless man on the far end. I didn’t even realize he was there.

“Sorry!” I whisper loudly, as he raises his head to see who violently roused him from his peaceful slumber.

He groans and rolls over. I close my eyes and inhale, deeply. It smells of musk, smoke, incense, urine-soaked clothing and fresh rain.

It has finally begun to sprinkle outside.

I don’t spend too much time in church. My neck, back and shoulders ache from sleeping the past week on a well-worn couch. My eyelids are heavy, and if I stay too long in that hard pew, I might end up cuddling the homeless man.

I’m tired. I’m kind of lonely; longing for human touch and affection. I haven’t realized it because I’ve been so busy. I also have a sudden urge to write.  I just want to write and write and write and vomit everything on the page so I can process.

I’ve missed New York. I’ve missed myself in New York. New York is the best date I’ve ever had. It’s the place I can fully, truly be me.

Since it’s finally fall, I decide a pumpkin coffee drink is in order. I head to overpriced, corporate coffee land and plant myself at the tall bar in the window.

I throw a few words up on the computer screen and decide they’re shit. I distract myself and post a picture I took of myself in the park. Look, I know: selfies are annoying. But I don’t care. I like myself.  Actually, I love myself. I’m as happy as can be.  I never want to forget these beautiful days.

After I receive substantial validation on social media, my gaze extends outside. I watch all the people briskly walking by.  A school of yellow taxicabs swarm in the background, as does an occasional, hurried ambulance. The high-pitched sirens and flashing lights aren’t much noise pollution anymore. They just go with the territory. It’s home.

A homeless man in a fairly clean, blue jacket has positioned himself next to a tree, in between a smoothie cart and a newsstand. I observe him for several minutes. He never asks for money, just patiently waits for people to read his sign. Most pass him by, not even noticing. 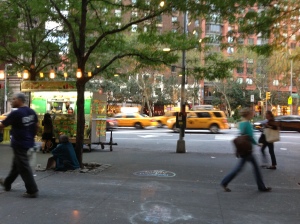 I watch a man in khaki pants, a canvas jacket and white New Balance sneakers go out of his way to offer the man some money. The exchange is brief, yet pleasant, and New Balance Sneakers Man walks away with a smile on his face, visibly pleased with himself.

I smile at him and keep writing.

An hour later, the homeless man by the tree has left his station, and a more vocal homeless man has taken his place.  I can’t hear him through the glass, but he’s dancing on one foot and talking a mile a minute to all who pass him. I gasp and realize I recognize him. He’s the same man who offered me chocolate on the train, on Valentine’s Day.

Almost as soon as I’m finished typing this last paragraph, he, too, is gone.

I smile, remembering that blustery, lonely, wintry day. I was different then. I’m different now.

Dreamers with empty hands
They sigh for exotic lands

Yes, jaded rou’es and gay divorceés
who lunch at the Ritz
will tell you that it’s divine

Yes, Lovers that bless the dark
on the benches in Central Park
Greet Autumn in New York
It’s good to live it again

To my sweet, precious, soon-to-be-born niece, Autumn, whom I love as my own already:  I cannot wait to meet you.

Welcome to this world. You are loved beyond anything you can ever imagine.

10 thoughts on “Autumn in New York”